Announcing a brand new show and interactive experience from Bay Area Children’s Theatre (BACT): The Imaginaries: An Immersive Musical recommended for ages 4 to 8 or anyone with a little extra imagination!

We are so grateful to Bay Area Children’s Theatre, the foremost theatre company for young audiences in California, for sponsoring 510families. BACT strives to bring shared experiences to children of all backgrounds, inspiring joy, empathy, and creative thinking. Their award-winning work has reached more than 700,000 kids and adults over the past 16 years. We just love their shows.

What is BACT The Imaginaries?

The Imaginaries: An Immersive Musical is an original, fully-immersive theatre experience and an unforgettable story premiering in Berkeley during March and April. Their downtown Berkeley theater is totally transformed into a magical and surprising wonderland Imaginary World with a candy pirate ship and secret tree castle. Children can slide into an extraordinary adventure and play while the show is in progress around them.

Kids can meet and interact with an unusual mermaid, a kind-hearted fox-bunny, a fish-person, a pegacorn, and more inventive creatures.

Sit anywhere in the space, whether on the traditional bench seating along the outside of the space or right smack in the middle of the action. And move when you want to. The play space is specifically designed for children to safely explore before, after, and even during the show. The actors may call upon you to use your imagination to help them think creatively, solve problems, or make a decision that affects the story.

A 5-year-old’s Review of The Imaginaries

Jack is a very opinionated 5-year-old who has never attended a play or musical. The Imaginaries is the perfect first-live-show experience for a kid like Jack because kids are allowed, even encouraged, to get up and move around, dance, and even interact with the actors during the show. Jack loved the characters and stage, and even got up and danced a few times (he’s kinda shy, so this was surprising and super cute). I could see a few parents squirming (myself included), as kids nudged closer to the actors, but it seems to be exactly the point of the show.

ProTip: Arrive around 30 minutes early so you and your kids can explore and play on and around the stage before the show. There’s a giant Connect 4, Jenga, castle slide, pirate ship and more. The colorful set is quite a scene to behold.

During the show, kids are all over the stage, sitting, sliding, jumping. But the actors seem more than able to handle the chaos, and even have a special sign they give the audience when they need the stage clear. And amazingly, the kids listen, scampering off to sit on stars on the ground. Running at about an hour, Jack started to get squirmy right around the 50 minute mark, though to be fair he may just have had to pee.

Here is what Jack says about the show:

“It was soooo cool! I really liked running on the stage. They let me play lots of games. There weren’t so many rules, like at school. The Pegacorn was my favorite. And the songs. It was so cool how we could go wherever we wanted during the show. I want to go back again. Now. Can we go again? Now??

ProTip: There will be a polite request to support The Bay Area Children’s Theatre at the end of the show, with a $20 gift earning you a fluffy yellow ball that your kid will most certainly want. If you don’t want to go home with the ball, try exiting out the side door (though please do still consider donating here if you’d like)

Plan your visit to see The Imaginaries: An Immersive Musical

Family Gift Pack Deal
Gift pack deals are flexible as patrons can add tickets and book numbers, as well as confirm show dates at a later time. The family gift pack includes the following for $154.99:

Thank you again to Bay Area Children’s Theatre for sponsoring 510families with this announcement. 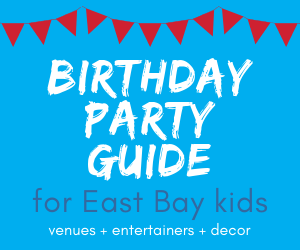